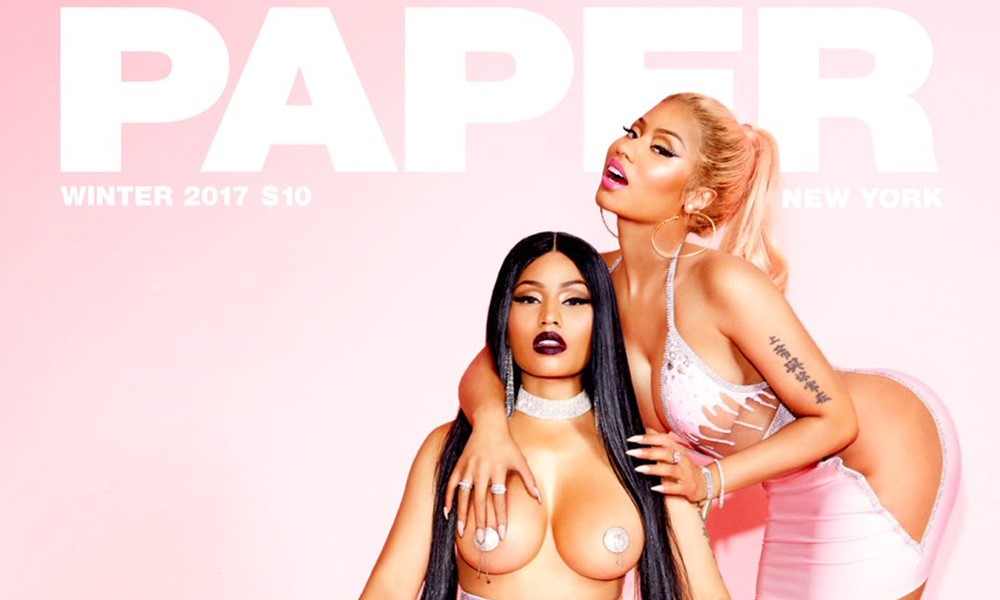 Rapper Nicki Minaj shows off her voluptuous figure in a sexy photo spread and cover for PAPER magazine’s Winter 2017 edition. The provocative shots were photographed by Ellen von Unwerth, and shows Minaj, in multiple images, including the cover, involved in a ”Minaj ŕ Trois” with herself. In the racy shots, Minaj is seen touching her goodies as well as squeezing her boobs, and more. See the below excerpts and photos from the feature.

On Her Upcoming ALbum: “I think the real music lovers just wanna be surprised, and all they care about is if I’ve grown as an artist and if they’re gonna be able to truly relate,” she explained. “I really don’t have much to say about the album other than it’s great and I’m excited about it.”

On a Collaborative Project Like JAY-Z and Kanye West’s Watch the Throne: “I would be open to doing [that] if the time was right,” she said. “I haven’t thought too much about that, though. The only person that I’ve seen a lot of people speak on, when talking about an album of that caliber, is Beyonce? ’cause we did ‘Flawless (Remix)’ and ‘Feeling Myself’ and we’ve actually performed together. I always see a lot of people saying, ‘Oh my gosh, a joint album with you guys would be really dope,’ but, you know, those are the kinds of things that are just wishful thinking from fans.”

On Acting: “I would love to do more acting. Acting is my first love. Of course, right now is the music portion of my life, but, you know, I can multitask. I don’t see myself doing something now that’s going to require too much time in terms of being on a set for six months, but I’m always open to at least discuss something in acting. I’ll always have the acting bug — I’ve had it since I was in elementary school. I was always doing plays and then went to a performing arts high school here in Manhattan. So I can’t see my life without it, but it definitely takes second position to my music.”

On Staying Cool: “Oh, I keep my cool because I’m a [firm] believer and I always get the last laugh. That’s been the theme of my life. You can usually bet your bottom dollar that anytime you see something on the Internet going on with me, no matter how it looks, I’m usually behind the scenes laughing. Because I have a strong relationship with God. I’ve watched Him work miracle after miracle in my life. I’ve watched Him shut down every person who’s ever come up against me, and so it’s comical at this point ’cause I sometimes feel like, ‘Wow. Don’t they know how this movie’s gonna play out? Cause I definitely know how this movie’s gonna play out.’ My closest friends and team members and family — we put it in God’s hands and leave it there. And we know that Nicki is always gonna have the last laugh. And Nicki is always gonna continue to be successful because I give so much to people who don’t deserve. And when you are consistently doing good for people who do not deserve your goodness, the universe has no choice but to give that back to you, tenfold.”

On Feeling Invincible: “I have a loyal fan base who never leaves. And all they do is motivate me and believe in me and fight for me. So anything that even seems negative has only made me even more of a magical unicorn. I feel this year I have never been stronger, I have all my super powers back. I’ve never felt this powerful, as a woman, as an emcee — I’ve never felt this invincible. And I think people have thought that they were gonna witness the Nicki Minaj nervous breakdown, but you’ve never seen it and you never will. You’re gonna continue to see me queening at Paris Fashion Week and having fun with my best friends. All my girlfriends have been in my life for over twenty years. I don’t have a circle of people around me of ‘yes-men’ or fakeness — I have my real friends that have been in my life since elementary school, junior high school, high school. It keeps me grounded and it keeps me genuinely happy, and when you really truly feel grateful every day, then you become really invincible. I live my life knowing that I deserve these blessings because I’ve been good to people who didn’t deserve it, didn’t appreciate it, took advantage of me, stole from me, lied on me, all these things and I still never came out and spoke against people. I could say things that would be really detrimental, but I love my life. I feel like when you love your life, you don’t have to hit below the belt. Just keep it moving. I believe in my talent, I know who I am…And when you have that knowledge, you just have to kind of sit back and wait for the rest of the world to catch up. And I feel like this new album is gonna do that. It’ll make people realize, ‘Yeah, okay, Nicki’s not going anywhere. Nicki is really who she says she is.’”

On Social Media: “I’ve always been very active with my fans, and so they expect me to speak to them when I put out something new. They expect me to ask their opinions, and they’re usually really excited when something comes out so they wanna have the chance to express themselves, and I like to give them that opportunity. But there are times where I take social media completely off my phone. I think that it’s important to deactivate sometimes and unplug yourself from the matrix, because as great as it’s been for my career, it can be unhealthy to certain people as well. If you don’t know how to control your emotions, if you don’t know how to think before you speak, it can also get you in a lot of trouble. [But] it remains something positive in my life, because even before my first album — with my three mixtapes — I was on Twitter all the time, talking to my fans about every song on every mixtape. So nothing has changed. I guess when artists become bigger they tend to shift their social media presence, but I’m just one of those artists that hasn’t done that.”