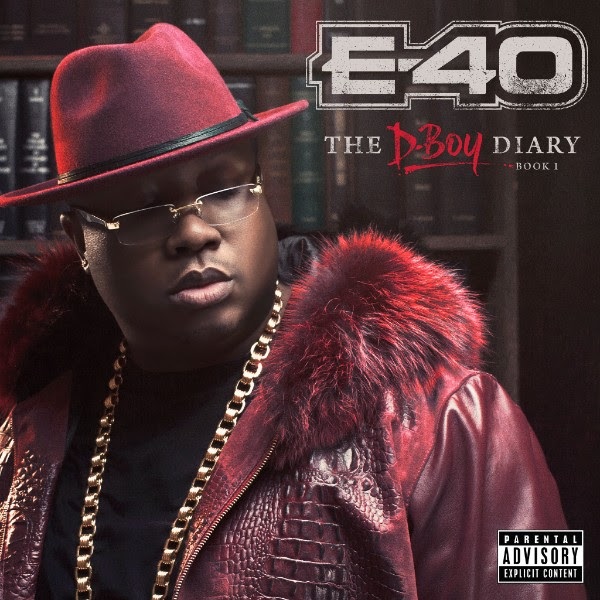 Explains E-40: “What’s happening at this point in my career defies logic. I still spit the realest and rawest shit of anyone in the rap game right now. The D-Boy Diary will lace the unlaced, will tutor the truant–it’s a guidebook for a street life.”

Well into his third decade as a rap hitmaker, E-40 added another career milestone in May when the RIAA certified his 2015 single “Choices” as a Gold Record. “Choices,” a national smash hit, is another in a long list of Gold and Platinum-certified records by the rapper. Earlier this year, 40 released bass-heavy banger “Slappin’,” featuring Nef The Pharaoh and D.R.A.M., which earned over 1.1 million views on the official YouTube video, and graced the airwaves with “Petty,” featuring Kamaiyah, one of the Bay Area’s brightest rising stars. In addition to his career in show business, E-40 is a respected entrepreneur in the adult beverage industry. Named after 40 Water’s government name, Earl Stevens Selections distributes high-quality wine to stores across the country. He has made inroads into the pre-mixed cocktail business with Sluricane. In 2015, E-40 released an eponymous brand of 40-oz. malt liquor. Killing the game as a rapper and as an entrepreneur, The D-Boy Diary will continue 40’s unprecedented career hot streak, satisfying old fans and winning new followers. Bring Back The Sideshow (ft. Mistah F.A.B. and Nef The Pharaoh)
Money (ft. Mozzy and Jay Rock)
This Goin’ Up (ft. Husalah and Turf Talk)
On One (ft. AD)
Get Money or Get Lost
Highway (ft. B-Legit and TreSolid)
Sick Out Here (ft. Droop-E)
Thank U (ft. Willy Will)
Military Time (ft. Salsalino and Baby Treeze)
Uh Huh (ft. YV)
2 Seater (ft. Kid Ink)
What It’s Gone Be (ft. D-Day and Tamoya Bell)
How Do U Like That
I Know a Guy
All I Know (ft. K Camp and Casey Veggies)
Waitin’ On a Play (ft. Nicamari)
Tycoon
Broke Bitches (ft. Joe Moses and Jay 305)
Flash On These Bitches (ft. Lil B)
Too Many
Paid Off (ft. Stresmatic)

Snoop Swags Out His Own Christmas Music Special With Special Guests